A few years ago I became intrigued by the Rust programming language. Like many other people I enjoy playing the popular Wordfeud game. I was looking for a programming project to exercise my Rust skills, and creating a wordfeud solver in Rust seemed like a nice challenge!

This article explains the algorithm used, how I implemented it in Rust, and how it performs. Along the way I explain some of the design choices made.

The Wordfeud game is derived from Scrabble. The objective of the game is to put words on the 15x15 game board with the letter tiles you have. You score points based on the value of each tile, and the type of the square where the tile is placed. In addition to the regular tiles you can also get a blank tile that can be assigned any letter when put on the board, but has a value of 0 points. Wordfeud can be played in different languages (English, German, French, Spanish, Dutch, Swedish, Norwegian, Danish, Portuguese and Finnish). Each language has a different tile distribution. The details of the game are explained here.

The initial goal for my Wordfeud Solver was to create a Rust library that can be used to build a Wordfeud player.

The solver presented here is based on the excellent wordfeudplayer Python package.

The wordlist is stored in a trie data structure. A trie is a search tree where each node has an associated label. All the descendants of a node have a common prefix. The root node is the empty string. 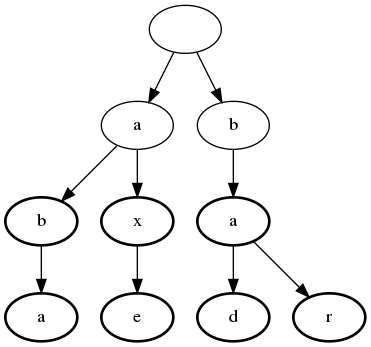 The wordfeud board can be thought of as a square grid of 15x15 cells, where each cell can be empty or contain a tile. It can be represented by 15 lines of 15 characters. Lower case letters are normal tiles, while upper case letters represent a blank tile used as a wildcard. For example, the screenshot above shows like this:

The steps to calculate all words that can be played with our letters will be in pseudo code:

A valid word must be connected, which means that it must “touch” a word in the other direction. Connected positions are empty cells that are horizontally or vertically adjacent to on occupied cell. For the above example, the connected cells for the horizontal direction are indicated by a * below (each cell with a tile is also connected):

A word can start in a position if we have enough letters to build a word to the next connected position. But a word can not start in a cell next to an occupied cell (because in that case the occupied cell would be part of the word). The possible start positions with 7 letters for the example are indicated with a + here:

Find possible letters for each position

For each start position we find the words that can start at that position.

As input we have:

At each recursive step, a used letter is removed from letters, and added to word, the position is incremented, and at the same time we descend in the wordlist.

Rust promises the ability to make software both fast, memory-efficient, and reliable. With that in mind, I started to port the Python version to Rust.

The static type system in Rust can help to prevent programming errors. As an example, in the wordfeud solver we can distinguish several types that are similar but have different roles and operations:

My first attempt used char to represent a tile, and Vec<char> or String to represent words, similar to the Python wordfeud player. An * is used for a blank tile, and an uppercase letter is an assigned blank on the board.

Instead I decided to use a newtype wrapper around a u8, for a couple of reasons:

I reserved 0 to represent an empty cell, and codes 1..31 for tile labels. By using a NonZeroU8 a cell can be stored as a Option

Access to the inner value is restricted to the tiles module, to ensure that only valid values can be stored in a type.

A trait Item defines common operations for the above types.

I used the tinyvec ArrayVec to store Items. The maximum size is 16 items. An ArrayVec is similar to Vec but it is backed by a fixed size array. That means no heap allocations are used, and it is cheap to copy.

Conversion to / from string

A Codec struct is used to translate between textual representation and tile codes.

The Wordlist in Rust

The wordlist is one of the central data structures in wordfeud-solver. Finding all possible words from a given start position is done in the Wordlist::matches method.

A time and space efficient data structure is crucial to the performance of the solver. As a typical example, the dutch wordlist has 340.674 words, and the wordlist tree has 990.506 nodes. From each node you can navigate to all the child nodes. There can be 0..32 child nodes.

I did a simple benchmark to compare the speed for a matches operation and the memory used when reading the dutch wordlist mentioned earlier.

The memory usage for the last two methods shows two phases: in the first phase the trie is build using a naive trie, in the second phase the trie is converted to a memory efficient representation. I can’t reproduce the benchmark time for the trie_rs method, but it is slower than the others. The custom trie I settled upon is memory efficient: it requires ~ 10 byte per node. It is also the fastest. All the nodes are stored in a single Vec<(u32, LabelSet)>. The nodes are stored in “breadth first” order. For each node, the u32 is the index in nodes vec of the first child node. The LabelSet is a bitset indicating which children are present in the node. To find a specific child label we find the index of the label in the labelset, and add the index of the first child.

The labels for the nodes are stored in a separate Vec<Label>. A Vec<bool> stores the terminal property for each node.

We can take advantage of the separate build phase by serializing the final wordlist and storing it on disk. The next time we need it we can just read the serialized wordlist from disk without having to build it. That saves substantial time and memory.

The Python wordfeud player has a recursive Node::matches method that is a generator function. Using a recursive generator results in an elegant and compact implementation. I show it here without further explanation, that would take us too far.

Unfortunately, Rust does not (yet) support generators, so porting this to Rust was a hurdle on the way. My first attempt was to return a Vec<Word> instead. Each invocation of matches begins with allocating an empty Vec, that is extended recursively and finally returned. It is relatively simple and it works. But it means a lot of temporary allocations are done, which is bad for performance.

By writing a custom recursive iterator that maintains the necessary state I could get rid of the temporary allocations, at the cost of some extra complexity. The Matches struct stores a reference to the Wordlist and the static Row and RowData arguments. The child_iter deque holds the variable state when recursively iterating the wordlist. Descending the tree pushes new arguments to the end of the deque, and iteration pops from the front.

The start_indices method returns the possible indices in a row where a word can start:

Iterating over the start indices results in an iterator for all the words in a row.

The Board in Rust

The wordfeud_solver should support different languages and wordlists. The Language enum specifies the supported languages. Currently, English, Dutch and Swedish are supported, but more will be added in the future.

For each language there is a TileSet that specifies the tile distribution for that language, and the Codec to translate between words/letters and tile codes.

The Board struct represents the state of the Wordfeud board. It consists of:

With all the above in place getting all the words for a row on the board is simple:

And finally all word scores are calculated:

Here are the results of a simple benchmark test: read a (dutch) wordlist, and calculate all the word scores for a test board. The first case with 7 letters (no blanks), the second with 6 letters and 1 blank. The test is run on an Asus Zenbook with an Intel Core-i5 (8th gen). It shows that the best Rust version is more than 100 times faster than the Python version, and more than 8 times faster than the initial Rust version.

NOTE: I can’t explain why calculating the word scores becomes faster when the wordlist is read from a bincoded file, but it is reproducible.

I experimented with rayon to calculate scores in parallel. On my quad core i5 it results in a speed-up of 1.4x with normal letters, and 2.1x with a single blank. This is a significant improvement, but less than the maximum speed-up of 4x you would expect with 4 cores.

I really enjoyed embarking on this project, and I learned a lot from it. I have done a lot of Python and C programming in the past, so I can make a comparison.

Rust is a good language for systems programming, while Python is more suitable for rapid development and scripting. In my experience Python is elegant and readable, and I feel a lot more productive using Python. The huge amount of high quality libraries, not having to wait for a compiler, the ease of interactive environments like Jupyter notebook attribute a lot. On the other hand, when performance and robustness is important, Rust is a big winner! Its unique ownership model makes safe concurrent programming possible, which can result in big performance gains. You can do parallel processing in Python, but because of the “GIL” (Global Interpreter Lock) multiple threads can not run at the same time. The solution is typically to run multiple processes in parallel, which requires additional overhead for communication.

Compared to C, Rust feels much more high level and expressive, with functional programming features like iterators and combinators, automatic type inference, traits and generics. The learning curve is steep, but I feel it pays off. Cargo makes it very easy to set up, build and distribute a project.

So now we can calculate the highest scores very fast. But in Wordfeud, the highest score is usually not the best! By playing a word you may enable your opponent to score a high word or letter bonus. So when you look for the best move you have to consider the possible responses from your opponent.

In a next article I want to show how the wordfeud-solver library can be used to find the “best” sccore by evaluating possible counter moves.

Read a Wordfeud board

I will also show how you use image processing and pattern matching to “read” the board state from a Wordfeud game screenshot.

If you made it this far, I hope you enjoyed reading this article!